U.S. Rowing’s Northwest Youth Championships 2019, which are crew’s end-of-season regional competition, were held this past weekend, May 17-19, at Vancouver Lake in Vancouver, Washington. Bainbridge Rowing emerged from the event with four boats and a total of 24 seats, the most ever for BIR, qualifying for nationals.

The team has yet to decide which of the qualifying boats will travel to national competition in Sarasota, Florida, June 6-9.

The Varsity Men’s 4+ took the gold in their final, edging out Green Lake by three-tenths of a second, and the Men’s 4x got silver.

BIR often does well in the Lightweight category, and this weekend was no exception. The Men’s 4+ finished first and the Women’s 4+ finished third in their finals. The Women’s 8+ took bronze and the Men’s 8+ silver.

BIR dominated the High School category, which is a costumed event limited to club team members who attend the same high school. The Men’s and Women’s High School 8+ crews took first in Finals 1 and second in Finals 2 races.

The Northwest Youth Championships are a huge affair, drawing 33 teams from all over Washington and Oregon for 66 events. All told, there were 817 entries in the weekend’s events. Bainbridge alone sent 115 athletes to the event.

The weather was a mixed bag, ranging from warm and sunny to unseasonably chilly and rainy. But the athletes didn’t seem to care, lounging in between races on the grass lawns, playing pickup football games, studying, visiting vendors’ tents, and hauling equipment.

Enjoy these images from the Northwest Youth Championships 2019: 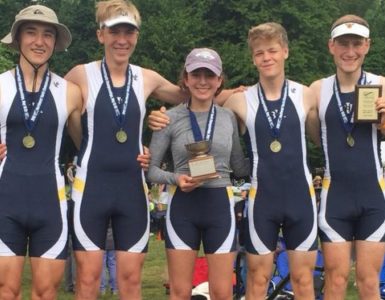 The BIR 2018 Spring Season has glittered in the different colors of metal earned at three major regattas and the USRowing Northwest Youth Championships (Regionals). Overall, BIR has pocketed 11 gold, 8 silver, and 18 bronze medals this spring...