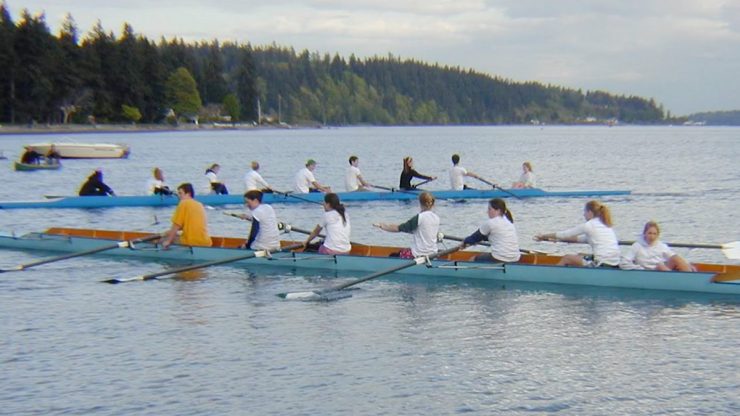 As a family-based, community grassroots organization, it is perhaps fitting that the beginnings of Bainbridge Island Rowing are rooted in a year 2000 conversation between a pair of local high school students and some very supportive parents. 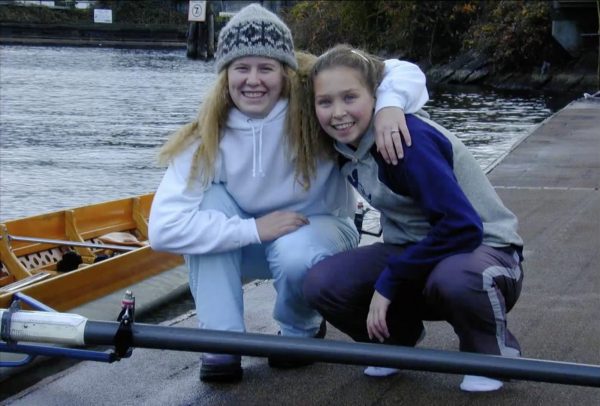 When Kacy Hamilton fell in love with rowing on Lake Union at the Pocock Rowing Center’s 1999 summer camp on Lake Union, she fell hard. Hard enough that when Kacy and her family moved to Bainbridge the next year and Kacy started classes at Bainbridge High School (BHS), she still took the ferry to Seattle and back every day to row before school. That grueling daily schedule led to family discussions about the need for youth rowing opportunities on an island community for which the sport was a natural fit. The discussions grew to also include Elizabeth Bailey, a fellow BHS athlete who had picked up rowing at Lake Washington as a replacement for swimming after breaking her thumb on a trampoline.

Elizabeth and Kacy quickly found more potential young rowers via an ad in the BHS school paper, and their parents sprang into action. Despite previously knowing little of rowing, Thom and Karen Hamilton had spent much of their lives on the water and thought that their daughter and her friend had both a good point and an idea worth supporting; according to Thom, “You always have to have someone step up to the plate: I put a lot of focus on our kids to try to nurture their wants, and to point them in the right direction”.

The Hamiltons and Elizabeth’s father, Stan Bailey, immediately reached out to some mutual Island friends, and within 90 days Bainbridge had a youth rowing organization. John Hempelmann (whose daughter Ashley was another founding BIR member) crafted the articles of incorporation, and Bainbridge Island Rowing was founded as a Washington State nonprofit in January of 2001, with Thom Hamilton, Stan Bailey, and Dan Gunn as BIR’s founding directors.

There can be no rowing without equipment, so Thom, Karen and Kacy reached back across Puget Sound to the Pocock Foundation, and with their assistance and support (including that of former Olympic rower/coach, Bruce Beall), paired with the advice from interested Bainbridge parents, and local experts Morgan Seeley and Grant Dull, BIR acquired its first boats and began to make Kacy & Elizabeth’s idea come to life.

Completing the startup process, Dan Gunn offered the yard of his house on Point White Drive as the initial home for BIR’s pair of used eight-person shells. Linda Brandt and Jay and Sue Trinidad agreed to be the team’s coaches. So it was, with the shells stored on slings, a backyard beachfront launch, and coaches yelling instructions as they ran along the beach (as there was no coach’s launch), BIR moved from scrappy concept into scrappy reality.

By the spring of 2001, BIR’s first juniors were out rowing in Rich Passage. Though many BHS students expressed initial interest, some had second thoughts when they learned how early they would need to be up to row. Nonetheless, a hardy group still stepped forward to accept the challenge, even if there were sometimes only six rowers out there in their nominal 8+.

Even without the example of senior rowers to follow in the boat, Kacy, Elizabeth, and their fellow student athletes were on the water day after day, quickly learning how to cope with wind, waves, and (ferry) wakes through sheer determination and Jay, Sue, and Linda’s enthusiastic guidance.

With a functioning rowing organization in place, structure quickly began to develop on the water and off. Sue Trinidad drew on her college experience to create a comprehensive Coxswain’s Manual, one that is still used by BIR today. Kate Durand assisted as a coach, but also created both a Policies and Procedures Manual, and a short-range five-point plan for BIR to become and maintain its position as a responsible youth sports entity. 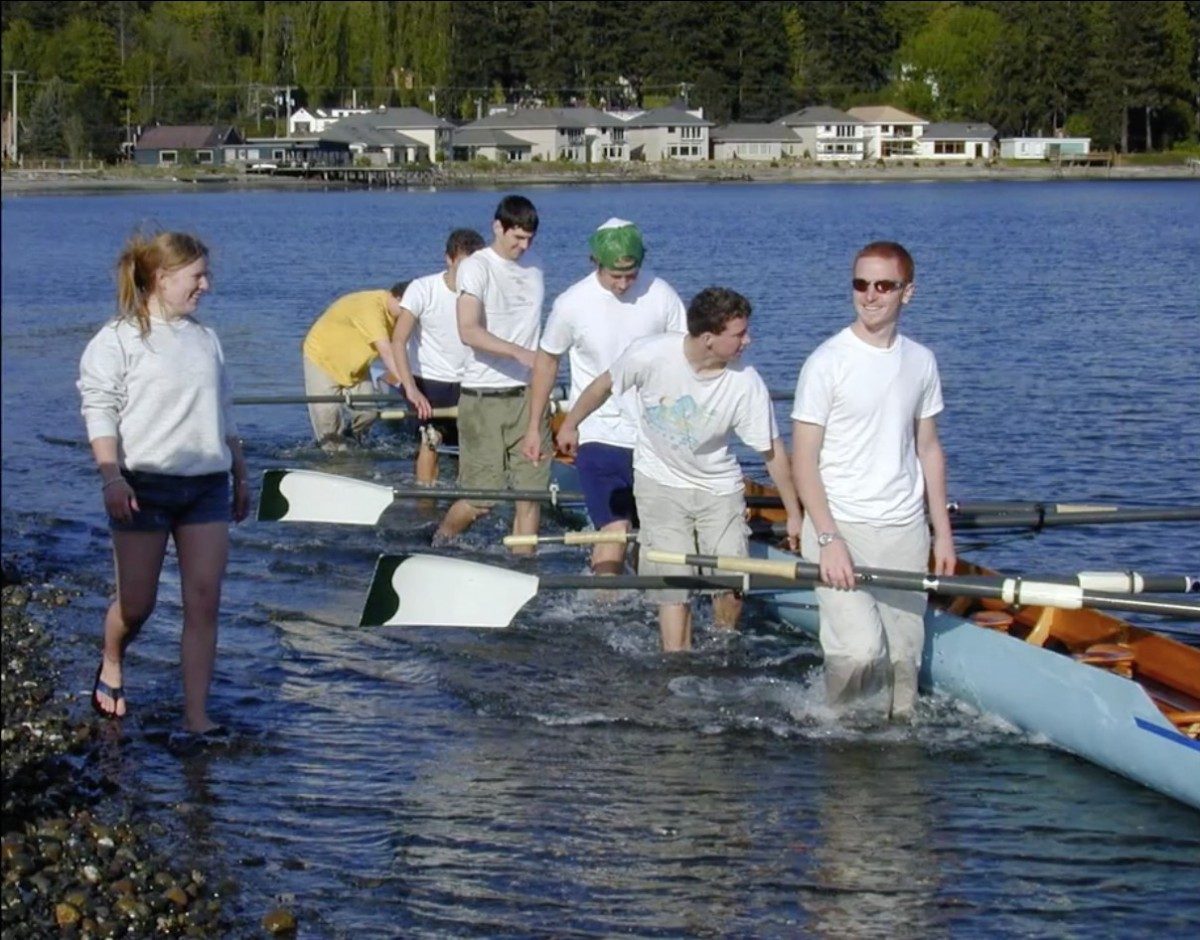 Such was the buzz created by the juniors and their supporters that adult athletes soon expressed an interest in joining, and in the summer of 2001, the BIR masters (post-college athletes) program was created. Outreach to Bainbridge residents through displays of shells and oars at the Farmers’ Market and the Pavilion spread the word, and dozens of adult Islanders took BIR’s new learn-to-row classes under the watchful eye of the Trinidads, Linda, Kate, and assistant coach Lisa Siegel.

With the challenges of rowing in Rich Passage clear, and the numbers of both adult and student athletes continuing to rise throughout the summer, the time soon passed for a backyard base of operations and the search for a more suitable long-term home began.

With the City’s assistance and permission, that search was concluded when BIR’s shells and oars were relocated to a rented chain-link fence enclosure in Eagle Harbor’s Waterfront Park during the September of 2001. The arrangement may have still been quite primitive: shells in slings, oars lying on the ground, and if anyone forgot the key, rowers had to become skilled at crawling under the fence and passing the boats out over the top! The boats were still beach-launched, but now that beach was just west of the public boat dock and into protected waters.

Eagle Harbor was (and is) a much better venue for rowing than Rich Passage: there is some boat traffic in and out of the marinas and mooring buoys to avoid, but wind and waves are greatly subdued, and the only significant wakes come from the Washington State Ferries out near Wyckoff Point, which can be either waited out or avoided by careful timing. Particularly at higher tides, the inner reaches of Eagle Harbor offer scenic, protected, quiet water where rowers can happily lose themselves in the rhythm of the boat and the beauty of their surroundings. 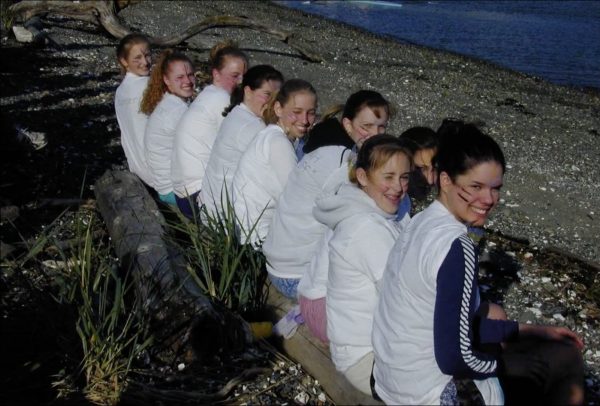 By the fall of 2001, with a new home secured and the masters and juniors programs both continuing to grow, the founding Board of Directors transitioned to a new team led by Kate Durand as President. BIR’s coaches were also relieved to have the use of a Boston Whaler motorboat for the first time, meaning that the move to Eagle Harbor also saw the end of coaches running along the shore, trying to keep up with ever-faster crews.

The Trinidads sparked great enthusiasm among the Juniors during the 2001-2002 season, and pleased parents were amazed to watch beloved former couch potatoes get out of bed daily at 4:30 am to row, run, erg, and train with makeshift weights. The program made its competitive debut in the spring, entering five (!) juniors crews at Green Lake and Mount Baker’s Spring Regattas, and at USRowing’s Northwest Regional Youth Championships in Vancouver, Washington.

The program benefited greatly from the immediate success of the strong athletes in the Novice Boys 4+ boat: Peter Mandell, Ross Henshaw, Rory Hiett, Francis Toglia and coxswain Alexandra Riede went undefeated in that first season and finished it in style, taking a gold medal at Regionals, as they sprinted from fourth to first over an exciting final 200 meters.

In the words of Coach Jay Trinidad, as recorded that month in The Bainbridge Review: “In 25 years, when Bainbridge Island has a trailer full of new boats, these kids will look back with pride that they were the first ones to do it… it takes a lot of guts for these kids to be the pioneers of rowing on the island.” 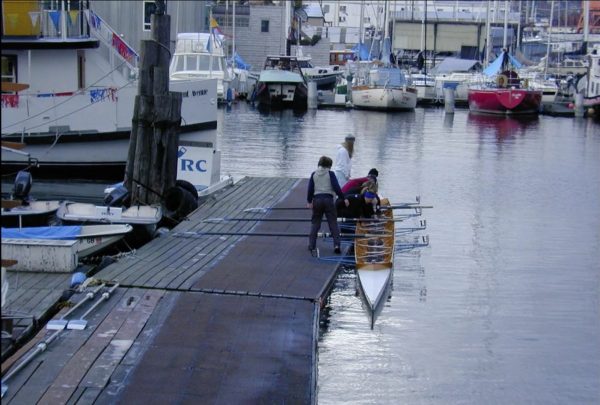 Additional coverage of BIR’s successful first season noted that, “Any high school [athlete] in Kitsap County is eligible” to join the ranks of BIR’s juniors, marking an early public proclamation of a shared vision and goal to make rowing accessible across in Kitsap County.

The masters soon joined the juniors in the waters of competition, entering three boats at Green Lake’s Summer Extravaganza (including a women’s eight notably featuring a mother and two of her daughters in Claudia, Courtney, and Hillary Dreiling). An excellent first season was rounded out by a ‘boatyard’ upgraded via custom wooden racks for shells and oars, designed by masters rower Russ McComb and built by juniors parent Michael Johncock. Go team!

In August, the Board adopted BIR’s first Five-Year Plan: establishing four principal goals, all of which remain salient today:

In less than two years, Bainbridge Island Rowing went from an idea to a plan, from a plan to a team, and from a team to a focused organization with multi-generational members, rules of governance, a board of directors, and an upward path to shared goals. Equipment was secured, training methods established, a home found, regattas entered (and won!), a daughter’s dream exceeded, and rowing in the West Sound forever changed…

“Rowing was a new sport that became popular, and that popularity was not because of Kacy or myself, or our founding board members, or Elizabeth; it was a result of the community, the parents and all of the volunteers and the commissions standing behind the program… it’s a success, and I am very optimistic about following the growth for many years to come…”

To learn more about Bainbridge Island Rowing, head to our homepage at bainbridgerowing.org