The very exclusive Windermere Cup is an invitation-only regatta that happened this past Saturday, May 4, in Seattle’s Mountlake Cut. The Bainbridge Island Rowing Girls’ Varsity 4+ boat was invited to race for the Colin Sykes Cup. BIR competed against Commencement Bay, Claremont Sports Institute, and perennial rival Holy Names Academy.

Although BIR came in fourth, the crew narrowed the gap over the year before between them and the three other powerhouse teams.

Each year, the last race of the Windermere Cup regatta is followed by the Seattle Yacht Club’s Opening Day Boat Parade on the Opening Day of the annual boating season. This year’s event consisted of 24 races involving more than 1,000 rowers. 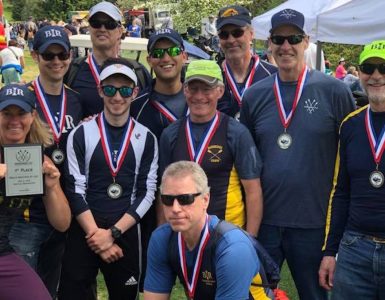 Saturday, May 5, at the Windermere Cup 2018 in Seattle’s Mountlake Cut, the Bainbridge Island Rowing Men’s Masters 8+ in the 55+/65+ age category squeezed across the finish line a mere five tenths of a second before Station L Rowing...

Varsity and Masters athletes from Bainbridge Island Rowing both competed in the 31st annual Windermere Cup Regatta in Seattle on Saturday, May 6th...