Saturday evening, November 16, more than 200 people packed the Wing Point Golf Club dining room for Bainbridge Island Rowing’s Dream Big 2019 Dinner, Auction, and Celebration. The theme of the night was family. Over and over, guest speakers, videos, slideshows, auction gifts, and even the celebrants themselves brought home the message that the BIR rowing community is a family, and a family needs a place to live. The home in question? The Stan Pocock Legacy Rowing Center, now under construction in Waterfront Park.

The considerable money raised by Dream Big 2019 (the total is still being calculated) will go toward continued Rowing Center construction, which involves putting a second story and then a roof on the current plein air foundation. Once completed, the second story will provide the 200-plus rowers who are members of BIR with bathrooms, changing rooms, and erging space as well as offices for coaches and a large multipurpose room that the entire Bainbridge community can enjoy.

After guests had registered, taken the opportunity to bid on items in the silent auction, bought raffle tickets, and enjoyed beverages and hors d’oeuvres, they took to their tables in the beautifully decorated dining space. Each table was adorned with a miniature boathouse connected by the roof to a clear helium-filled balloon.

Vashon-based auctioneers and emcees Martha Enson and Kevin Joyce, collectively known as Enjoy Productions, started off the night with a collection of images of BIR rowers accompanied by the radio announcer’s call of the 1936 Olympic gold-medal crew race in which the United States narrowly defeated the Italian crew and the more experienced and favored German team. At the slideshow’s end, timed perfectly with the race’s conclusion, the room erupted in applause.

It Takes a Village

BIR Board President Sue Entress took the mic and thanked BIR staff, board members, and leadership team members, including rower parent Rob Bloom and Dee McComb who co-chaired the event.

Sue then referenced her daughter’s college admission essay writing experience in which she finally hit upon a theme, that one person can make a difference. Sue expanded upon the concept, referencing the Rowing Center: “We can put our collective good together to make something,” raising the remaining $1.4 million toward the $3.4 million structure. She finished by asking everyone at Dream Big 2019 to support the “super-duper lofty goal of building a rowing center that will put a roof over this incredible community.”

Shannon and Tim Taylor, who were sitting at a table toward the back of the room, asked to speak next. They directed the audience to two master rowers, Karen and Beth, who had just married that day. Shannon said to the attendees, “You’re a big group of people who say yes,” like Karen and Beth just had. She compared rowing to marriage: “You go backwards really fast, sometimes with your eyes closed.” Tim asked everyone at Dream Big 2019 to stand and raise a glass to the newlyweds. He said, “To rowing, to love, to Karen and Beth.”

Junior rower and BHS senior Ella Goodman grabbed the mic and spoke about her experience moving to Bainbridge as a young girl. She spent years trying to find “her place,” playing lacrosse for four years, trying tennis and then volleyball, and finally going out for crew, about which she knew exactly nothing. She thought it was cool to see the boats stored on the Waterfront Park tennis courts, pre-boathouse. She enjoyed the different perspective on Bainbridge from the water. Ella spent her novice year in a 4-person boat. Somehow, they managed to flip the boat, the first time in BIR history that a four had done so.

But now Ella, in her fourth year of rowing at BIR, knows what a regatta is, knows how to set a boat. She said that, in order to find a place, you need to find a family, and her crew team is her second family. She said, “With the new boathouse, we will finally have a home for our family.”

Meloni Courtway, the BIR Director of Communications, took the stage in very sparkly shoes with a chunky high heel. She talked about how she and her family had moved every few years for over a decade because of her husband’s job. When they landed on Bainbridge, Meloni felt lost. When a neighbor called out to her that she looked “fun,” inviting her to try out rowing, Meloni thought, “Why not?” and gave it a try.

She said that she had never been an athlete in her past but then held up a gold and silver medal from nationals and regionals to show that she is now. People are impressed, she said, when she’s in a group of non-rowers and tells them what she does. “This dance on water with power and grace was completely accessible to me,” Meloni said. She told her husband “Weigh enough!” the coxsain’s command to halt. “We aren’t moving again.”

Before leaving the stage, Meloni asked all the rowers in the room to stand. “This,” she said, looking at the crowd of people standing at Dream Big 2019, “is what a family looks like.”

A Small Man with Superpowers

BIR head coach Bruce Beall introduced the night’s guest speaker, David Grant, the founder of the Orange Coast Community College rowing program in Newport Beach, California, the first and only rowing program at a junior college in the country. Dave, who launched the program with 300 feet of sand, storing their two boats in tents, went on to coach the ’84 Olympic Rowing Team.

The Orange Coast teams are always competitive, winning 80 percent of their races, and in 2018 earned USRowing’s Medal of Honor for Extraordinary Feats. But the thing Dave is most proud of are his student-athletes. He recalled what one young rower said to him: “Dave, I can’t do this . . . yet,” the yet being the marker of goal setting and the drive for perfection.

He concluded his remarks by saying that the goal of his rowing program is to build scaffolding, “a safety net to give a second chance” and to foster “a youth spent with friends.”

Sam Bloom, a BIR graduate and cox since freshman year, who will be rowing for Western Washington University starting in January, reviewed the history of the boathouse. He recalled the puddles, the tarps, the wet textbooks, the birds nesting in boats. “The hurdles made us stronger,” he said, “but what stands out are the triumphs.”

Once a cox, always a cox. Sam called one last race for BIR, to the team’s fundraising goal. He said they were 300 meters out: “This is where we push ourselves. What we’ve been fighting for is tangible. We need to put on that last sprint. Let’s take a power 10 into the sprint and let’s raise the roof.”

Each level—starting at $50,000 and moving on down to $100—of the paddle call swiftly raised a bundle. The top levels all had donor matches and so almost instantly doubled, including at the $50,000 level.

There were seven auction items to bid on, ranging from High Tea for 12 to a Coaches’ Wet Bar. Attendees were generous and competitive, as you would expect from a room full of rowers, with the highest live bid of the evening awarded to “Refresh, Remodel and Remodel with Rob!” which included a package of design consultation carpentry work by BIR master rower Rob Smallwood.

Once the fabulous gifts were given out, it was time for the dessert dash, and the highest-bidding table got to make the first run for the best choices, which included cakes, cupcakes, and even a fruit plate.

The auctioneers drew raffle tickets for the final event of Dream Big 2019, and then this big, loud family all went to their respective abodes, the future of Bainbridge Island Rowing’s home more secure. 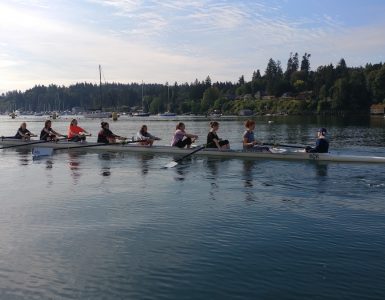 Yes, it’s June and time for BIR summer camps. Get up early and look out over Eagle Harbor to see dozens of high school kids sculling across the water, joined by herons and harbor seals. Sing it, everyone: I said a boom chick-a boom I said a... 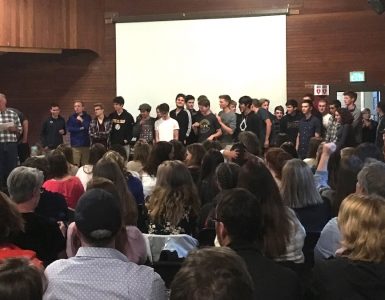